Dr Nigel Robb, Programme Director and Mr Alasdair Miller, previous Programme Director, welcomed everyone and celebrated the continued success of the programme. The quality of the students was evident when citations, which covered professional activities and outside interests, were read out about the successful candidates who were able to attend the event.

The diplomates were congratulated on their achievements by Professor Jonathan Sandy, Dean of the Faculty of Medicine and Dentistry (formerly Head of the School of Oral and Dental Sciences). This was followed by a prize giving ceremony to recognise the success and outstanding achievements of students on individual units within the Bristol University Open Learning for Dentists (BUOLD) programme.

The Schottlander Prize, presented by Sarah Bain, Interim Head of the School of Oral and Dental Sciences, was won by Laurie Powell. The prize is awarded to the best student on the Prosthetics Unit of the course.

The Laurence Oldham prize, which is awarded for the best performance in the Oral Surgery Unit, was presented by Mr Oldham himself to Pamela Ray [2012-13 year] and Nick Gibbs [2013-14 year]. Mr Oldham has been a great supporter of the BUOLD Programme and he has been involved in the development and delivery of the original Oral Surgery unit for nearly 24 years. During the academic year 2013-14 he also stood in for the Unit Lead of the new Surgical Skills 1 course.

The prize for best student in Business Management Skills was awarded to Paula Souto [2013 year] and Mark Dermont [2014 year]. The award was presented by Matthew Pyke, CEO of Lloyd & White, who sponsor the prize.

The Marsh Midda Prize is awarded in memory of the late Marsh Midda, who was Professor of Periodontology at the University of Bristol and a larger than life character who is remembered by all who met him. His widow, Mrs Brenda Midda, attended the reception and presented the prize to Ruth Walker.

Professor Sandy, after thanking the families of students past and present for their support, congratulated all of the successful diplomats and expressed his hope that they would stay in touch with the University.

The group were photographed on the steps of the Victoria Rooms in the February sunshine and the event finished with refreshments in the Recital Room. 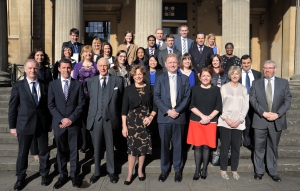 Please click on this image for the full-sized version.

Further information on the BUOLD programme is available from the online prospectus or from the BUOLD Administrator (buold-office@bristol.ac.uk).

Next Academic year the following courses will be offered: –

Details on the application process are available from buold-admissions@bristol.ac.uk